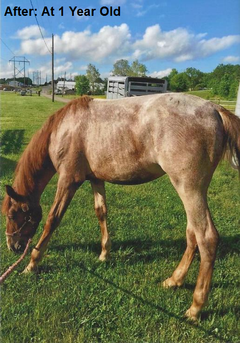 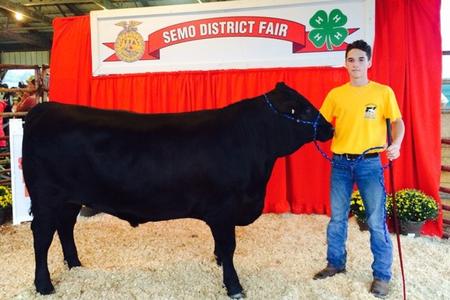 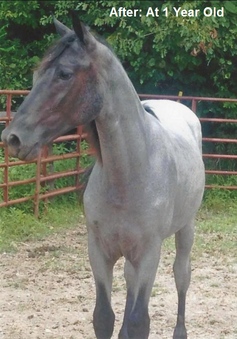 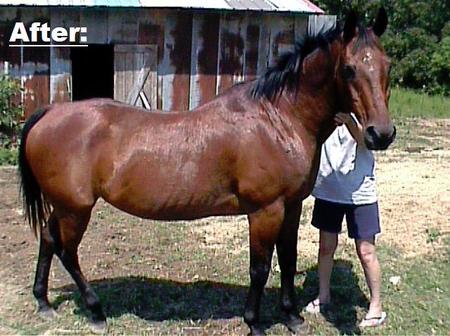 This blue roan colt was acquired by Stone Creek Stables at 5 months old. Paul started feeding him JuniorGlo™* after he arrived at their stable. 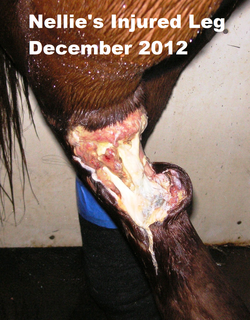 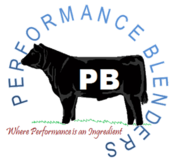 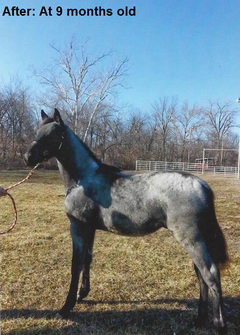 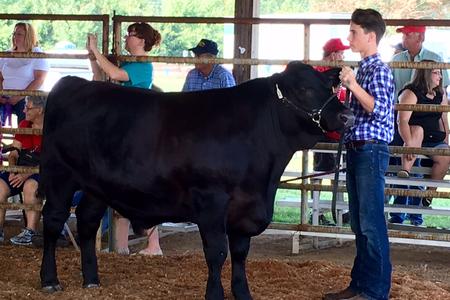 This red roan TWH filly was acquired by Stone Creek Stables at 7 months old, as seen in this picture, and Paul started her on JuniorGlo™* after she arrived at his stable. 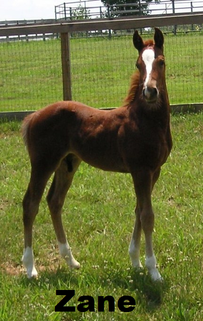 *Products available for purchase and in stock at Performance Blenders

Before and After: This senior gelding was in need of weight gain. He has been feed SeniorGlo and GroStrong for 6 months when the second pictures were taken. 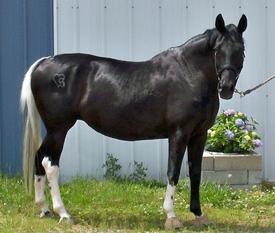 On December 4, 2004, Twila heard of a horse in her neighborhood that was about to be put down due to its inability to gain weight. Twila arrived just 30 minutes before the horse, Peanut, was to be put to sleep and convinced the owner to let her have Peanut. On the way home, Ed and Twila stopped and weighed Peanut. He weighed 757 pounds.

Ed, an employee of Performance Blenders, got together with Gerry Shinn and called Equine Specialist Charlie Patrick for recommendations to care for Peanut’s nutritional needs. Peanut’s previous diet included 6 pounds of a competitor’s horse feed, along with salt blocks and fescue hay.

On day 21, he was dewormed with SafeGuard* and again on day 51 with a deworming gel.

After his recovery, Peanut was feed a mix put together by Gerry and Geoff Shinn of  Performance Blenders using GroStrong Mintrate and GroStrong mineral. The before and after pictures tell the story! Peanut sure was happy Twila came along to give him a good home!

*Available for purchase and in stock at Performance Blenders

Nellie, the Lettaus' pregnant mare, suffer a severe leg injury in December 2012. With a lot of vet work and the right nutrition, Nellie was almost fully recovered in May 2013 when she foaled Zane. Nellie and Zane were fed SeniorGlo*, MoorGlo*, and Timothy/Alfalfa Cubes*. The Lettaus' owed a lot of Nellie's recovery to the correct nutrition she received from ADM feeds. Zane was later weaned to JuniorGlo*.

This is the same colt at 9 months old. He had been on JuniorGlo™* for 4 months at this point. 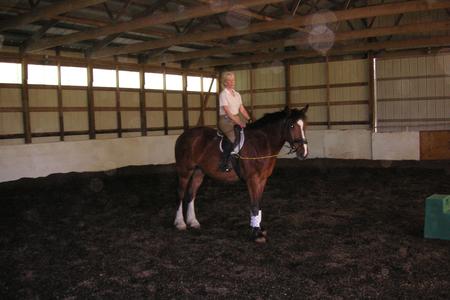 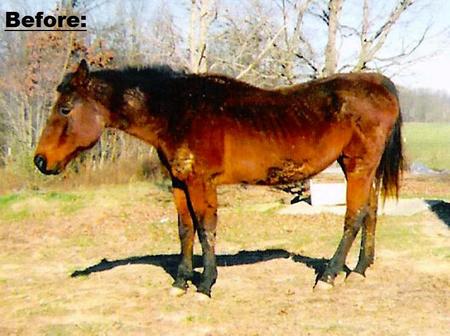 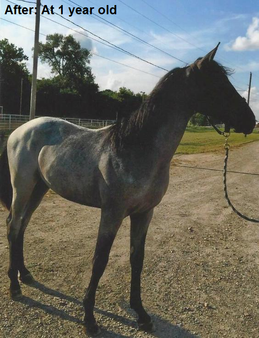 This is the same red roan filly at 1 year old, after being on JuniorGlo™* for 5 months. She was switched to PrimeGlo™* at 18 months old. Paul was very pleased with JuniorGlo™* and what is able to do for his horses. 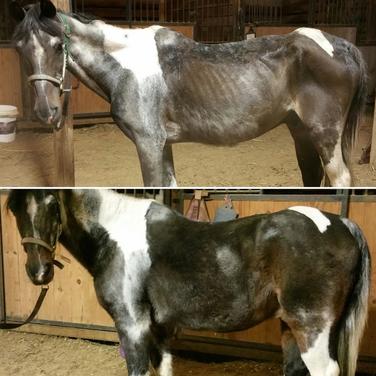 "I have 165 chickens currently; 70 of the are laying. The other half are well on their way to laying. I began feeding ADM Egg Maker*in September 2016 and I have noticed a huge difference in production. I've actually had hens that were virtually shut down start laying once I started using Egg Maker Pellets*. I've been very satisfied with the results I've had. I have used a crumble from [competitor] in the past and not had the production I've seen with the ADM product. The eggs have been bigger and have stronger shells! The chickens look and act a lot healthier as well.

Performance Blenders has been a great group to work with. They all possess a wide knowledge of the products they handle. I've learned a lot from working with Holly, Geoff, Whitney, and Gerry. I do believe I've found a feed supplier I can truly count on."

DeKor, Sansi, and Diva are healthy horses that are currently being fed PrimeGlo* and Timothy/Alfalfa Hay Cubes*. They have very healthy hair coats and are well conditioned. Nice looking horses, Rick and Rebel! Thank you for the pictures!

Hopscotch was an orphan foal that was hand raised by Rick and Rebel. He was raised on ADM horse feeds. The first picture is of Hopscotch as a newborn and the the second is a current picture of him, full grown. 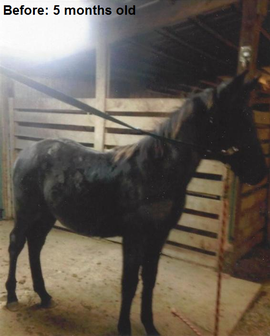 February 3, 2017. Samantha Cowell of Jackson, MO has excellent results feeding her senior horse SeniorGlo horse feed and GroStrong Mineral from Performance Blenders. When Samantha came to us, she had recently got her childhood horse back and he needed to gain weight. Samantha writes:

"My horse is very old and missing many teeth. When I got him, the humane society scaled him at a one or two (at best) out of 10 as a body condition score. I had tried other senior feeds and found myself going through 2 bags every four or five days. I was finding it hard to afford it along with the other items he needed (because he can no longer chew hay). My barn owner recommended I try ADM and see how he would do on it. I was astounded! It now takes almost two weeks for me to use a bag of SeniorGlo*. And he looks better than he has in years! His hooves and coat are beautiful. Not to mention that he has gained all his weight back, and then some! I'm even able to give lessons on him now! I could not be happier with our results.

I love the price of SeniorGlo* and how little I need to feed to get great results. It's not even a dollar more [per bag] than I was paying for other senior feeds and it lasts twice as long! I'm also seeing better results as far as him gaining fat and muscle. His hair and hooves look better now than they have in years.

I cannot thank Performance Blenders enough. I would not have my best friend back if it wasn't for SeniorGlo*. They have helped me give him his golden years. I'm so blessed to be able to provide him with a great diet and all that he needs by feeding ADM. Thank you all so much!" 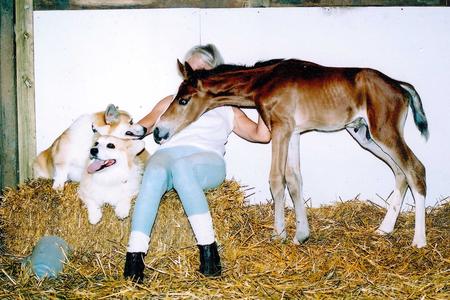 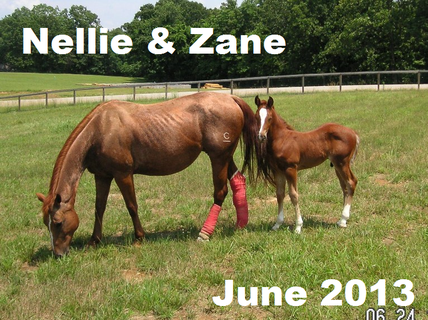 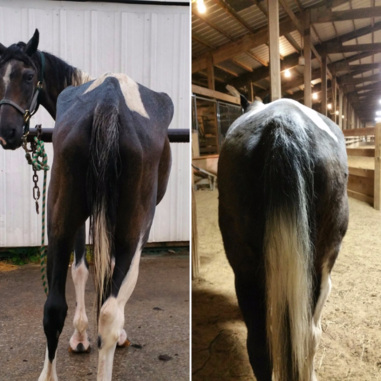 This is the same TWH colt again at 1 year old, after being on JuniorGlo™* for 7 months. At 18 months old he was switched over to PrimeGlo™*. Paul is very pleased with the results.

Rick and Rebel Lettau have been Performance Blenders customers since 2003 and they have had a lot of success with the ADM products that we carry. They feed their horses PrimeGlo*, Pro-Vita-Min 20 Tubs*, Forage First Timothy/Alfalfa Cubes*, MoorGlo*, JuniorGlo*, and SeniorGlo*. Rick commented, "ADM and Performance Blenders always have what we need." 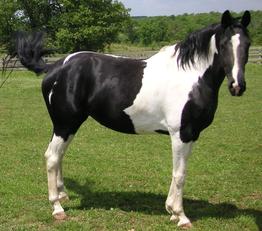 If you are interested in submitting a testimonial about any of Performance Blenders's products and want to appear on this page, please stop by the office and fill out a testimonial form and submit pictures of your projects and success stories. Call us at 573-204-1227. 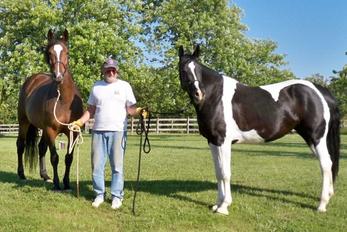 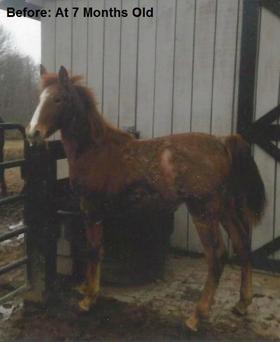 ​Where Performance is an Ingredient